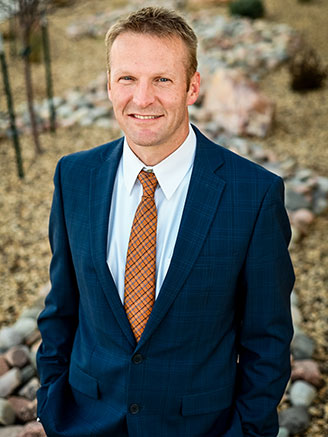 Dr. Lance M. Palmer was born and raised in a small community in northern Utah. He graduated from Weber State University in Ogden, from which he received a Bachelor of Science in microbiology. Dr. Palmer obtained his professional training from Dalhousie University School of Dentistry in Nova Scotia, Canada. In 2009 he moved to Garden City, where he worked for United Methodist Mexican American Ministries Dental Clinic for two years before continuing his professional career in private practice.

Dr. Palmer is a member of the American Dental Association, Kansas Dental Association, Central District Dental Association, and the Oil Belt Study Club. He appreciates the value of service and had the opportunity to serve a two-year mission for the Church of Jesus Christ of Latter-Day Saints in Southern California, where he learned to speak Spanish fluently and developed a deep love for Latin American culture.

Dr. Palmer has been married to his wife Amber for more than a dozen years. They have four children. Dr. Palmer currently enjoys serving as a youth leader in his church. He also enjoys fishing, hunting, sports, and any time with his family.

Dr. Palmer has an appreciation for education and healthcare, and says he has the best job in the world. He believes in providing genuine, compassionate care to everyone.